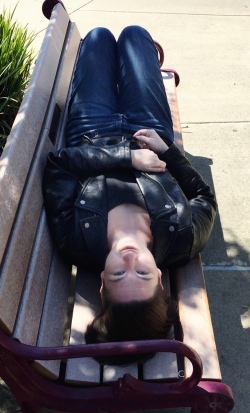 A lot of writers tell great stories about being wild, imaginative children with life-long ambitions of sharing their fantastical daydreams. That was never Erica. As a little girl, Erica was so dyslexic that she could barely read a book. The only reason she had any exposure to Tad Williams, Isaac Asimov and JRR Tolkien was because her mother would read them to Erica and her sister every night before bed. She struggled through every single English class she ever had. Erica had nine majors in college, finally culminating in a Communications degree and a short, disastrous journalism career. To this day, her resumé is so toxic that she can’t even get a job at Starbucks. That’s probably a good thing, since she can burn absolutely anything edible or potable. Anything.

But at some point in college – with the help of her then-boyfriend and now-husband, Aron Christensen – Erica began writing Crucible of Stars. It took two years to draft and then several more to edit. When it was done, she started on Sword of Dreams and butchered it spectacularly. Erica scrapped the manuscript and figured that she should work on something else for a while. That’s when she wrote In the House of Five Dragons. That book had a whole new crop of problems, but at least most of them were different ones than before. So at least she learned something.

It was just two books, but for a girl who nearly flunked the fourth grade because she couldn’t even write a 500-word short story, it was amazing. Erica has been writing with Aron ever since. 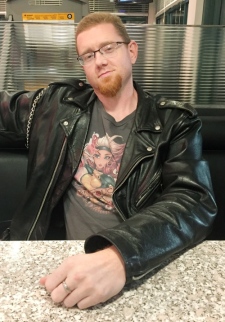 Aron’s the one with the day job. So in addition to all of his contributions, he also keeps the family fed. His coauthoring began simply as input on Crucible of Stars, then more emphatic advice on In the House of Five Dragons that resulted in scrapping 100 pages of work. Erica just about tore out his throat for that one, but Aron was absolutely right. They had a major plot hole that was going to ruin the whole book if they didn’t fix it. After that was Sword of Dreams. Erica told Aron that he better come be her coauthor from page one this time around. She didn’t want to get months into a manuscript just to discover that they had overlooked something simple. Aron agreed.

Despite being the more sociable and prolific writer of the duo, he’s almost silent online. But he’s the vital backbone to all we do at Loose Leaf Stories.

Want to say more than that, Aron? Then write your own dang bio!

Natalie and Eric are really just Erica and Aron, but those are the pen names they use to write erotica. Why bother with a different set of pen names? Well, no one wants any of our Erica Lindquist and Aron Christensen readers accidentally ending up with smutty stories in their hands. It might be a rather rude shock to go from mainstream fantasy and sci-fi to the forest of cocks that is the Natalie and Eric Severine catalog.

So if you like LLS genre fiction, but want a lot more steamy bits, try out Natalie and Eric Severine. If not, consider those names a warning label. Enjoy!

These are the LLS cats. It’s a little hard to tell in this picture, but Oy is about twice as big as Trogdor. He’s a 20-pound bengal/tabby mix with sharp claws, long teeth and a bite that can crack bones. Not as ferocious as it sounds, though… Oy is kind of a wuss. A friend made me a fleece Baymax blanket and Oy freaked right the fuck out. Wouldn’t get near it for days. He still regards it warily. As a kitten, the big dork once failed to corner correctly and smashed his face into a wall, breaking his nose. As a result, he’s got the loudest snore in the entire house.

Oy is named after the billy-bumbler in Stephen King’s The Dark Tower.

Trogdor is a little orange slip of a tabby cat. He’s tiny and friendly and dumb as a post. He gets into head-butting contests with the wall. He insisted on wrestling with Oy, who is – as previously mentioned – twice his size. Dumbass. But Oy is – also as previously mentioned – a complete coward. So Trogdor wins more often than you might expect. Maybe he’s not so dumb after all…